Add to Lightbox
Image 1 of 6 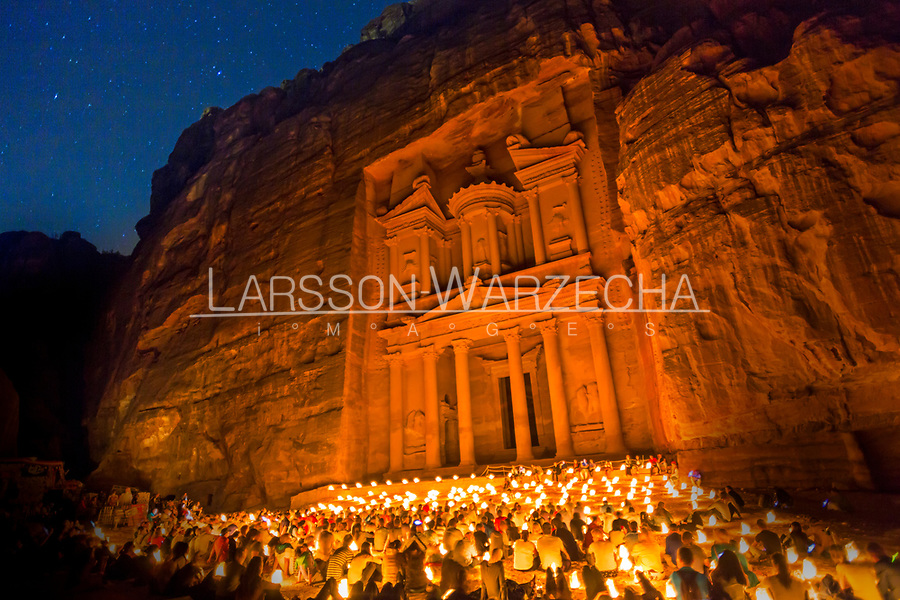 Petra by night is a romantic affair, walking through the lantern lit gorge (siq) with no other lighting makes you feel like a true explorer.
This ancient site, established possibly as early as 312 BCE as the capital city of the Nabataeans, it is a symbol of Jordan. It lies on the slope of Jebel al-Madhbah (identified by some as the biblical Mount Hor) in a basin among the mountains which form the eastern flank of Arabah (Wadi Araba), the large valley running from the Dead Sea to the Gulf of Aqaba. Petra has been a UNESCO World Heritage Site since 1985. The site remained unknown to the Western world until 1812, when it was introduced by Swiss explorer Johann Ludwig Burckhardt.
UNESCO has described it as "one of the most precious cultural properties of man's cultural heritage". Petra was named amongst the New 7 Wonders of the World in 2007 and was also chosen by the Smithsonian Magazine as one of the "28 Places to See Before You Die".
Lukasz Larsson Warzecha | www.LWimages.com | All Rights Reserved
WRITTEN PERMISSION FOR USAGE, WITH AGREEMENT ON RATES, MUST BE OBTAINED FROM 'LWimages - Photographs by LUKASZ WARZECHA' PRIOR TO PUBLICATION. ANY UNAUTHORIZED USE IS A VIOLATION OF COPYRIGHT AND SUBJECT TO PENALTIES. Sample low-res files are for examination only.
candle light, Middle East, UNESCO World Heritage Site, desert, Petra, Petra by night, Treasury, Al-Khaznah, Jordan